Pedraza is a town and municipality in the province of Segovia (Spain), located 37 km northeast of the capital Segovia and with a resident population of 467 people. It is a walled medieval town, whose careful restoration led to its declaration as a Historic Site in 1951. The municipality is made up of Pedraza and the villages of Rades de Abajo and La Velilla. It is beautiful and worth visiting. You can go by car or on foot along forest roads from La Casona de Castilnovo. Monuments of interest: Plaza porticada, Castle, Puerta de la Villa, prison, church of San Juan.

Gastronomy: The gastronomy of the town corresponds to the traditional one of the province of Segovia, highlighting the roast lamb, the farm’s beans, the roast suckling pig or the Segovian punch. 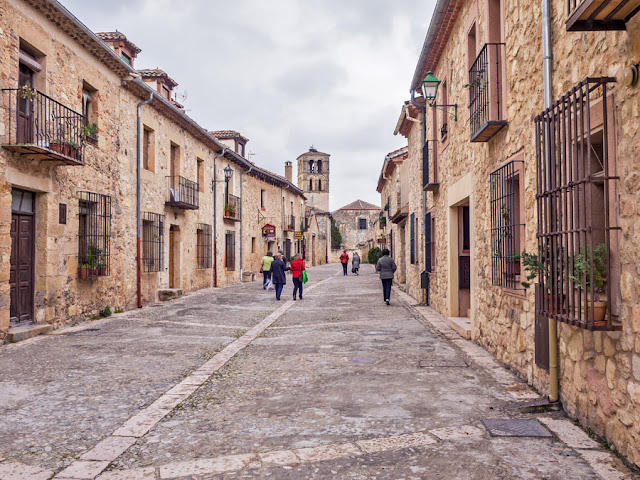 Sepúlveda, municipality and town in the province of Segovia, autonomous community of Castilla y León, (Spain).

Sepúlveda belongs to the region of Villa y Tierra de Sepúlveda, of which it is the head town and to the judicial party of the same name of which it is head, located in the northeast of the province of Segovia. It is 55 km from Segovia capital, 137 km from Burgos, 119 from Madrid (on the A-1) and 115 from Valladolid.

Segovia is a Spanish city in the southern part of the autonomous community of Castilla y León, capital of the province of the same name. It is located at the confluence of the Eresma and Clamores rivers, at the foot of the Sierra de Guadarrama.

The old city of Segovia and its aqueduct were declared a World Heritage Site by Unesco in 1985.

The Segovia Aqueduct, 818 meters long, is considered the most important Roman civil engineering work in Spain, and is one of the most significant and best preserved monuments of those left by the Romans in the Iberian Peninsula. 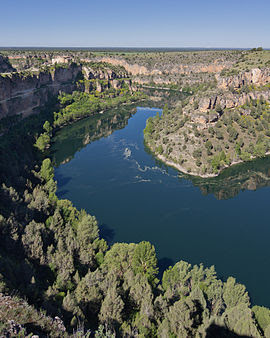 The Hoces del Río Duratón Natural Park is a protected area that includes the environment of the sickles that this river has in its middle section. These are the canyon that the Duratón, a tributary of the Douro River, has excavated in a limestone rock area between the towns of Sepúlveda and Burgomillodo (annex of Carrascal del Río), northeast of the province of Segovia.

This place, made up of the middle course of the Duratón, was declared a Natural Park on June 27, 1989 by the Cortes de Castilla y León, integrating with the protected areas of that community, a statement made in attention to the importance of its natural ecosystems and landscape values. The colony of griffon vultures established in the protected area is considered the largest in Europe, both for its number, 575 pairs registered in 2003, and for its reproductive level. This colony has become one of the main attractions of the park.

The declaration of Natural Park was made to contribute to the conservation of its gea, fauna, flora, waters and, in short, its natural ecosystems and landscape values ​​in harmony with the traditional agricultural uses and uses and with the development of educational activities, scientific, cultural, recreational, tourist or socioeconomic compatible with the necessary protection of space. 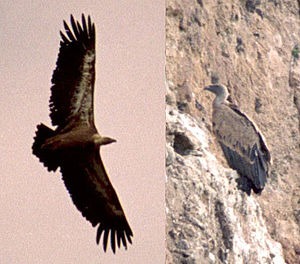 The sickles of the Duratón river were classified as a Special Protection Area for Birds (ZEPA), being integrated into the Natura 2000 Network in April 1991 and declared as a Site of Community Importance (LIC) in January 1998. Since 2004 the Park management is carried out through the LIFE Project, a specific action program of the European Union, within which different maintenance and recovery actions are carried out as well as the search for a sustainable development of its resources. One of the purposes of the LIFE project is to contribute to the development of a management model for the future Natura 2000 Network.

The park occupies an area of ​​5,037 hectares that extends on land in the municipalities of Sepúlveda, Sebúlcor and Carrascal del Río, all in the province of Segovia. Along with its natural wealth, there is an important cultural heritage that makes it an important tourist and leisure destination. Stresses the hermitage of San Frutos and the monastery of Nuestra Señora de la Hoz.

Maderuelo is a monumental municipality and town located in the north of the province of Segovia, in the autonomous community of Castilla y León (Spain).

Its municipal area of ​​94.19 km², borders the province of Soria and the province of Burgos. Has a population of 136 inhabitants. The river that runs through it is the Riaza River.

It is a town with a medieval church that contains a mummy of a girl found in the surroundings. Right next to the church, there is a catapult that is not used except in medieval festivals held in the summer.

The town is on top of a hill and is surrounded by a reservoir, also called the Linares reservoir, which houses an old bridge that was covered by water when the reservoir was built.

The town serves as the setting for the television series Tierra de lobos. 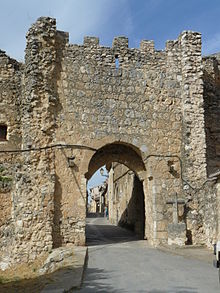 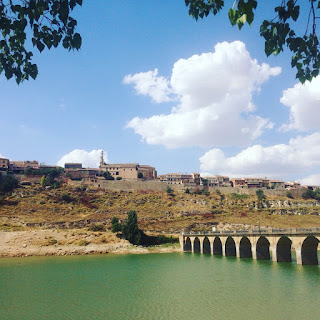